View cart “Alpha Base Capsules w/o Iron” has been added to your cart.

The mucosal epithelium serves multiple purposes including allowing nutrients from the diet to be absorbed and digested while simultaneously serving as a barrier that protects against unwanted food particles, toxins and microorganisms from passing directly into the body. Mucosagen includes a synergistic blend of ingredients that support the health of the GI lining while maintaining normal inflammatory balance and liver detoxification pathways to support overall health. 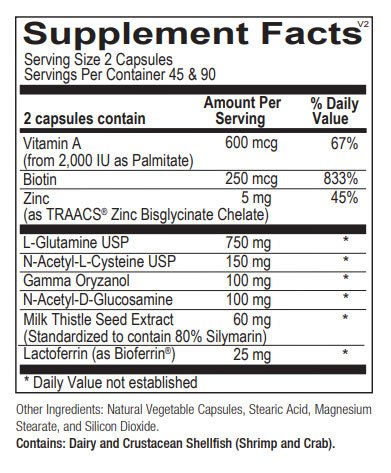 Gamma Oryzanol
Gamma oryzanol is a natural component of rice bran oil. It is a mixture of ferulic acid esters of sterol and triterpene alcohols. Rice bran oil includes about 1-2% gamma oryzanol, which it functions as a highly effective antioxidant in the GI tract.

Lactoferrin
Lactoferrin is a glycoprotein that is naturally found in colostrum. It helps maintain normal microbial and inflammatory balance in the GI tract.

Silymarin (Milk Thistle Seed Extract)
Milk thistle (Silybum marianum) is an annual plant indigenous to Europe and the United States and has been used for centuries as an herbal medicine to boost liver function.

Micronutrient Blend
Mucosagen includes the synergistic nutrient combination of zinc, vitamin A, and biotin, which are crucial for supporting GI health.

2 capsules three times per day or as recommended by your health care professional.

The supplement and herbs on this website have not been evaluated by the Food & Drug Administration. These supplements are not intended to diagnose, treat, cure or prevent any disease.